Having a baby is one goal that many couples aspire to achieve. Nothing compares to bringing new life to the world. Unfortunately, some people have problems with their fertility, making it difficult for them to have a baby. In the past, this meant the end of the line for their dreams of raising a family. However, modern technology now gives couples multiple fertility options such as artificial insemination. Artificial insemination,  which is one of the most popular methods and is relatively straightforward, effective, and safe. This technology was first developed to breed livestock but now adopted for use in humans.

What Is Artificial Insemination?

During sex, natural insemination occurs when a man ejaculates semen into his partner’s vagina. Sperm cells then travel upwards through the rest of the female reproductive tract until they reach and fertilize the egg cell. Artificial insemination uses equipment to deposit sperm into the female reproductive tract, but the insemination site needs choosing so that the sperm have to travel less. This technique increases the chances of fertilization. According to Frances E. Shields, M.D., “Before inseminations are even planned, the physician should talk to both the husband and wife and be informed as fully as possible concerning their sincerity, their emotional stability, and their intellectual capacity.”

What Conditions Can Artificial Insemination Be Used For?

For males, artificial insemination is useful for low sperm counts or low sperm motility, which is when the sperm cells are too weak to reach the egg cell by reasonable means. For females, artificial insemination is useful when the woman’s cervical mucus, which the sperm have to pass through, is too unfavorable for sperm survival.

Sometimes, a woman may be allergic to specific components of semen.

In this case, artificial insemination allows the sperm to be processed to remove any allergens.

Subfertility caused by other factors, such as radiation treatment, can make it hard to conceive. Artificial insemination can offset the difficulty, which makes conception easier.

What Should You Expect To Do For Artificial Insemination?

Timing is a crucial part of artificial insemination, as the depositing of sperm should as a woman ovulates. To do the procedure, there is an ovulation testing kit given to the woman, which can be used to predict when she will release an egg. She may also be asked to undergo regular ultrasounds and temperature measurements to confirm if she has ovulated or not. “AI may be performed following a natural ovulation or after inducing ovulation with ovary-stimulating medication,”  Dr. Liji Thomas, MD says.  In some cases, she might be asked to take medications, such as Clomid, to make her ovulate.

Once they set the ovulation date, there is another date set for sperm collection. If the sperm is to come from the male, he will usually be asked to avoid sexual activities for around two to five days before the collection day. This precaution ensures that sperm counts are sufficiently high once they did the collection. During the collection day itself, the male will be asked to collect semen with a sterile container. Due to the limited lifespan of sperm cells outside the body, the collection is preferably done in the clinic unless the couple lives up to an hour away from the facility.

For ICI, they usually conduct the procedure in an office.

A doctor injects the collected semen into the vagina, near the cervix, using a special syringe. Aside from a needle, a cervical cap can be used to keep the sperm on the cervical opening for a set amount of time.

During this time, the woman is told to lie down for 15 to 30 minutes, allowing sperm sufficient time to travel to the uterus. After around two weeks, a pregnancy test is conducted to see if the procedure was successful.

For IUI, the same steps apply, but additional procedures are done to process the collected semen. The sperm cells are washed, removing some proteins and other components which might hinder successful fertilization. Washing also makes the sperm cells more concentrated. The sperm cells are then placed inside the uterus using a catheter. A speculum is used to keep the vagina open during this procedure.

How Successful Is The Procedure?

Are There Any Side Effects to Artificial Insemination?

Some cramping and light bleeding can sometimes occur during the insemination procedure, but overall, the process is painless.

Infection is sporadic if the system conducted is in a professional clinical setting; it is still possible. The vagina serves to protect the rest of the female reproductive tract from infection, so bypassing it can lead to some risk.

If the woman is made to ovulate using Clomid or is taking other fertility medication, there is a significantly higher chance of having twins or triplets. It should be accounted for when planning for a family. A pregnancy with multiple fetuses has a higher risk.

Rarely, the medications used to stimulate ovulation can cause ovarian hyperstimulation syndrome or OHSS. The ovaries swell due to overstimulation, causing bloating and abdominal pain. Rarely, dehydration and shortness of breath can occur. Severe cases will need hospital admittance.

Are There Other Alternatives to Artificial Insemination?

If artificial insemination is insufficient, the couple may consider in vitro fertilization or IVF. This procedure involves extracting both sperm and egg cells from the couple. As the name implies, propagation is in the laboratory under controlled conditions. The most viable fertilized eggs implanted in the uterus of the female.

Doctors usually recommend artificial insemination for up to six cycles only. Additional treatments after this point are unlikely to yield results. At this point, people generally consider IVF.

If you already have a donor and would like to do it without the help of a clinic, you can use this home sperm test to check the fertility of your specimen. You can purchase the home sperm test here. 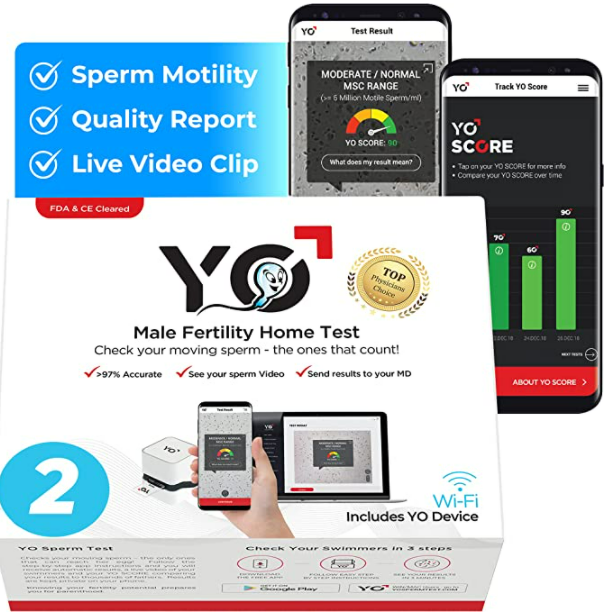 How is artificial insemination done?
The sperm is inserted directly into the uterus, cervix or fallopian tubes. It cuts the travel of the sperm and it eliminates any obstruction. The most used method is intrauterine insemination.

How much does it cost to get inseminated?
Intrauterine insemination costs between $300-$1000 per cycle. If you opt for a sperm donor, per vial costs $700-$1000. On the other hand, intracervical insemination is around $200-$350 per cycle.

Can u get pregnant if you insert sperm with a syringe?
Yes, it is possible to get pregnant using sperm in the syringe. Semen must be injected into the vagina with a syringe during ovulation for a higher chance of getting pregnant.

Can you have twins with IUI?
There is an increased chance of having multiple pregnancies with IUI. If there are multiple eggs released in ovulation, the chances of fertilizing more than one egg increases.

Disclaimer: The information on this site is not intended or implied to be a substitute for professional medical advice, diagnosis or treatment. All content, including text, graphics, images and information, contained on or available through this website is for general information purposes only. Please see a medical professional if you need help with depression, illness, or have any concerns whatsoever. WE DO NOT OFFER MEDICAL ADVICE, COURSE OF TREATMENT, DIAGNOSIS OR ANY OTHER OPINION on your conditions or treatment options. SERVICES OR PRODUCTS THAT YOU OBTAIN THROUGH THIS WEBSITE are for information purposes only and not offered as medical or psychological advice, guidance or treatment.

We also use some affiliate links in this blog to help support continuous production of wholesome parenting content such as this. 🙂 Feel free to use them to show your support.